Well we are home and very happy, eating roast beef and drinking PG Tips.  Our month volunteering in the Peruvian Amazon was brilliant – pretty difficult to draw any animals though as they’re either impossible to see or moving very fast.  But anyway here we go, my last travel sketch entry…

The lodge we volunteered at is called the Manu Learning Centre, owned by the CREES organisation.  It was a beautifully designed place, all dark polished wood and thatched rooves.  The buildings had open sides so you were breathing open air 24/7.  There was no electricity except occasionally for the kitchen/internet, so at night it was pitch black except for candles, stars, headlamps and fireflies.  There was wildlife everywhere in the garden; much easier to see than in the rainforest actually. 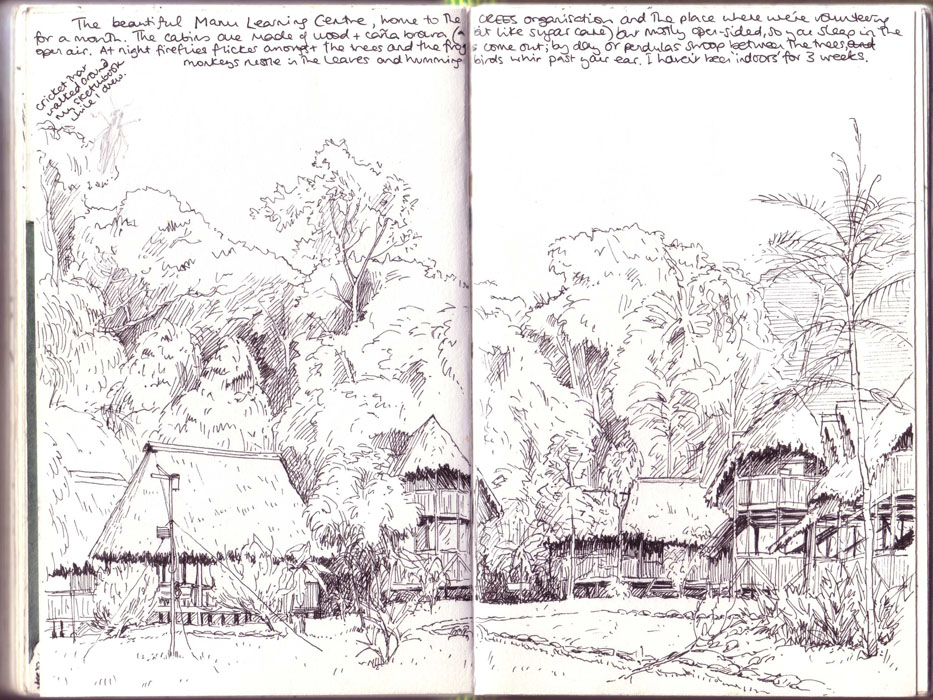 The purple flowers below are loved by hummingbirds, whilst the so-called walking palm on the right was one of my favourite trees.  As my notes say, when young they can move up to 2m by putting roots down on one side, thereby bringing them closer to the light.  I thought they were straight out of a Lord Of The Rings/Labyrinth-type movie. 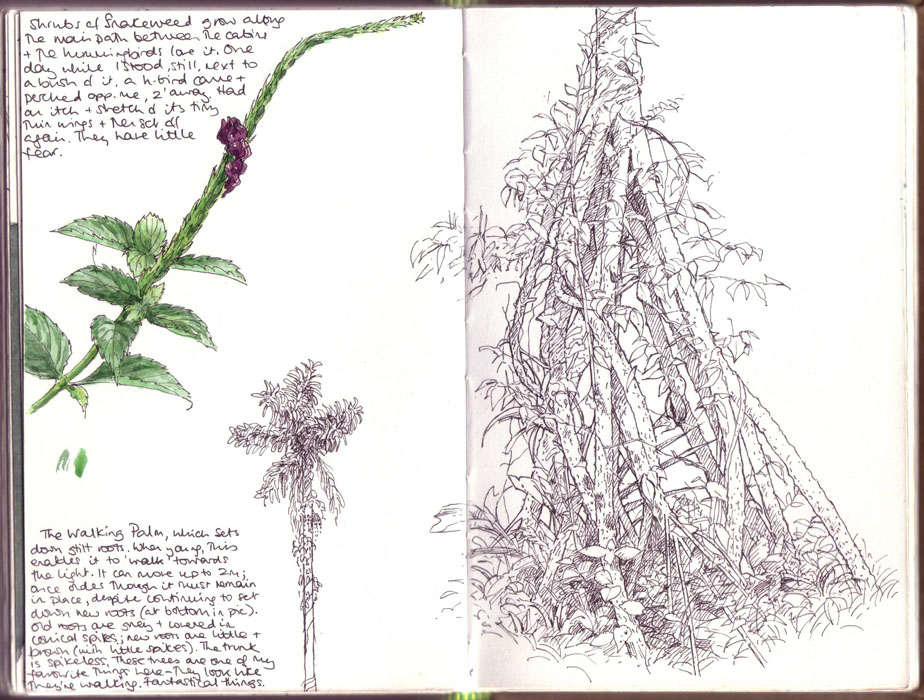 The MLC lodge was just above a river, the Madre de Dios.  When down there you really felt like you were in the rainforest – misty hills of deep green jungle rising up whichever way you look.  It’s vast, despite the deforestation which you see taking place in many areas. 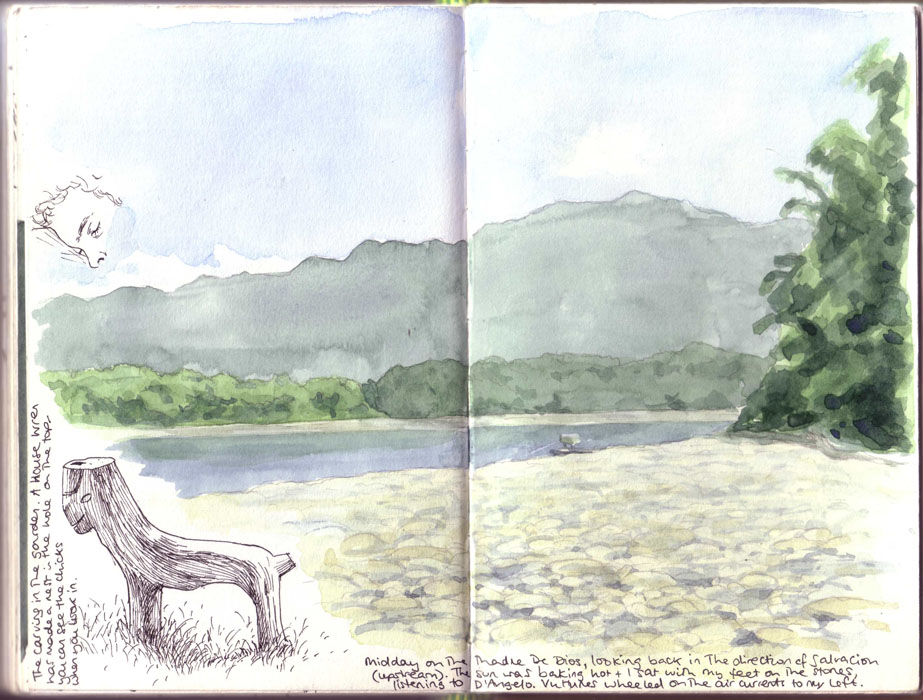 In our last week we went on a 4 day expedition into the nearby area.  First night was spent at another volunteering lodge where they had in-house monkeys and a macaw.  Below is Chico, a 9-month-old Red Howler monkey who, despite being a wild animal that had only been there a week, desperately wanted human affection.  He was there because he got injured falling out of a tree; I don’t think natural selection would have had a lot of patience with that, but they took him in so we’ll see what happens. 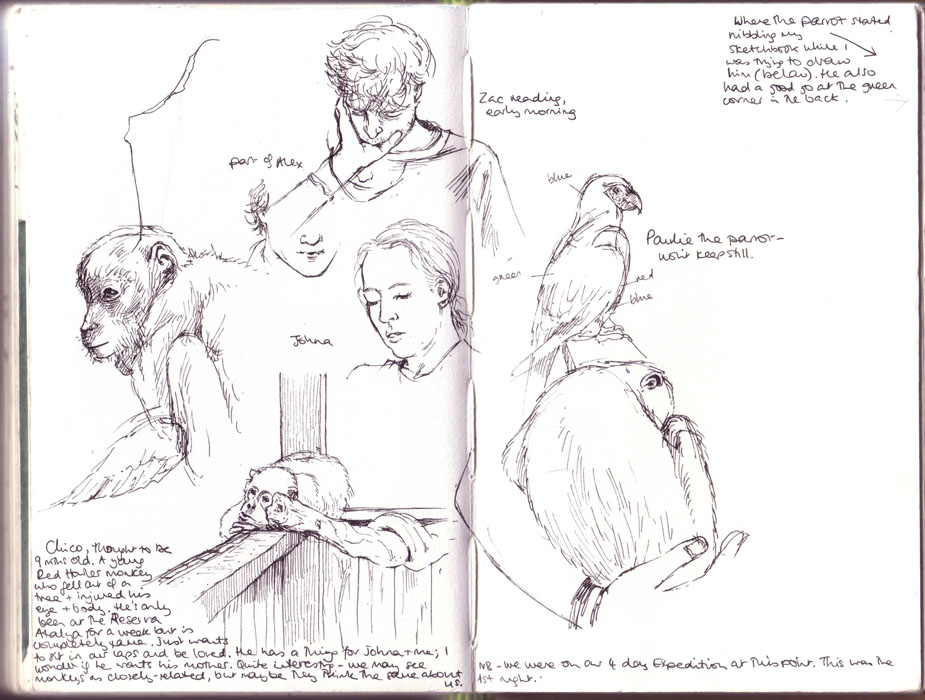 On the 2nd day of our expedition, we went to stay with a native community.  Most of the people in this area of jungle were actually Andeans who had moved there (Cusco/the Andes are 8 hours’ drive away) seeking a better life, but there are also native jungle communities scattered around.  It was fascinating.  These are some of the natives demonstrating their crafts to us – basket-weaving, jewellery-making and carving spears (which has to be done topless apparently).  They still used spears/bows and arrows to hunt in the forest.  Randomly they also had two very indignant turkeys wandering around, permanently tense and occasionally gobbling in horror over some unseen issue.

The people on the right were in Cusco airport, waiting for our flight to Lima at the end of our trip. 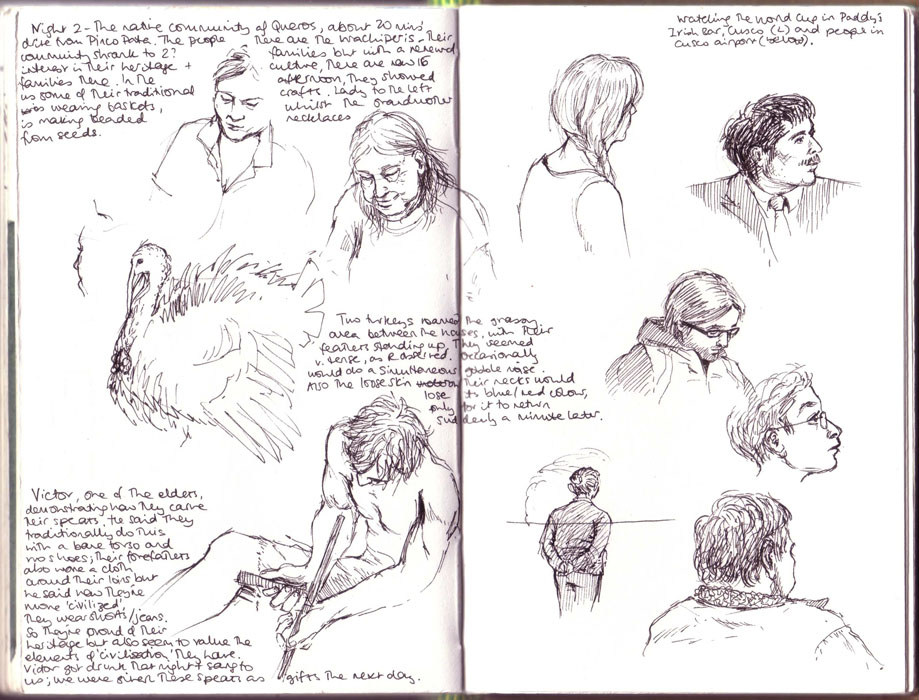 And then it was all over.  As usual everyone on our flight to Madrid was asleep except for me.  I feel kind of mischievous drawing sleeping people, but they make such obedient models you can’t not really. 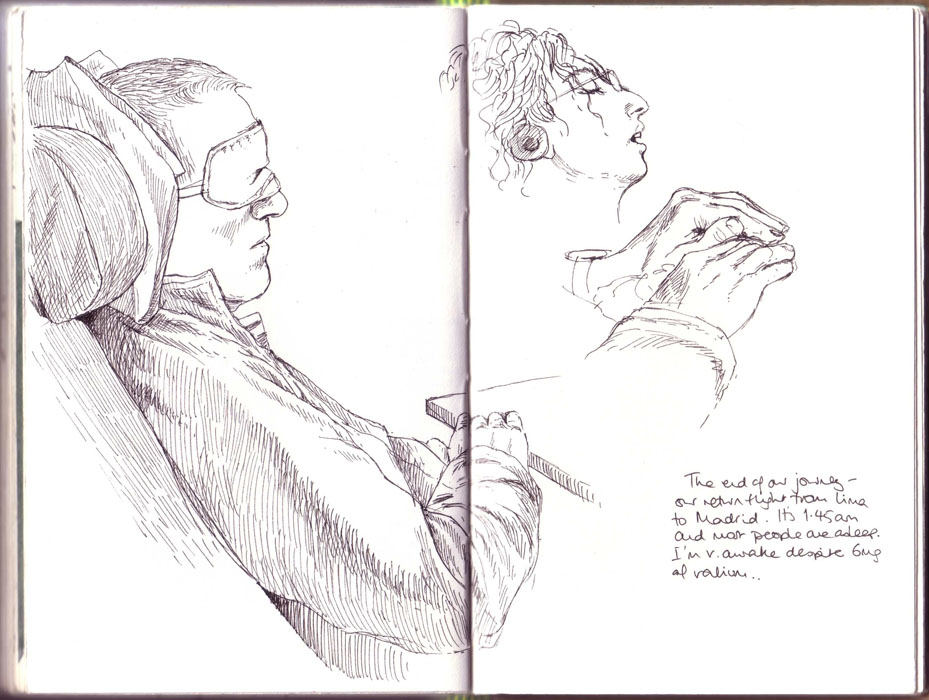 So goodbye South America.  Peru was wonderful; actually I might post some photos of the crafts I bought, they’re all so beautiful.  Thanks for checking my blog if you’ve been following it; it’s back to sketches of everyday British life now I’m afraid.  But there’s no extra value in the exotic really; it’s all just life trying to get by whichever land you’re in and species you are.  I will miss the variety of life in the rainforest though, and going to sleep to the sound of thousands of creatures buzzing in the night.  Quite pleased to see the back of the microscopic ticks though.